Latin American integration has been our men and women’s dream throughout history. Beyond the illusions and frustrations, the truth is that there are some fields where we have advanced significantly and the legal area is one of those fields. The ties between the Peruvian and Argentine legal community are a clear example of that community. Many years have passed since this exchange began, which has lasted through different generations and is now noticeably intensified. For that reason, the publication of this book in Peru has a special significance for me, since it is another step in this historical continuity. It is the opportunity to present my concerns to Peruvian friends about the problematics of private law and its new profiles. (Fragment of the Preface to the Peruvian Edition) 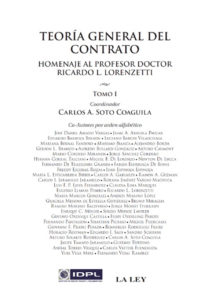 Ricardo Luis Lorenzetti is one of the most important Latin American jurists of the last decades. His legal work covers the academic field, as well as the professional practice as a lawyer and arbitrator in important cases in Argentina and Latin America. He is currently Minister of the Supreme Court of Argentina, having been elected (and re-elected) President of the Court two years after his appointment in 2006. Dr. Lorenzetti is one of those unusual figures in the legal world who, by his versatility and solidity, sets the standard for students and legal professionals, inside and outside the borders of his homeland, but also someone who projects- what is more important – legitimacy to the institutional framework. (Fragment of the Presentation, by Carlos Alberto Soto Coaguila)