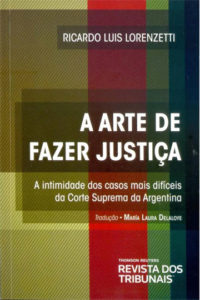 The choice of this topic for the elaboration of a research book is not only right due to its topicality, but also because it provides an opportunity to reflect on the way in which the law addresses these problems. This second question rises a certain malaise of the facts regarding the theory at different levels. Cases do not conform to the rules, the laws do not provide solutions, the legal theory seems to be uncomfortable and, above all, the legal system lost credibility. (Excerpt from the prologue by Ricardo L. Lorenzetti: Rethinking actions for international consumer protection against the financial crisis)

The legal history of the West was built on the basis of the protection of property and of the person, which left an indelible mark in numerous investigations, which lead to the application of that model of guardianship to a new area: the environment. Throughout this work, we try to demonstrate that this adaptation is incorrect because we are not in the presence of an analogous fact, but a completely different one. Therefore, it requires an appropriate theory … Environmental goods are not mere empirical facts that can be legislated, but they are part of a complex system that motivates its own regulations and classifying orders. All it takes is to observe the international treaties and national laws existing in the world on soils, seas, drinking water, glaciers, flora and fauna, pure air, global warming, species in extinction and others similar to appreciate the insufficiency of the analogy. (Fragment of the Preface) 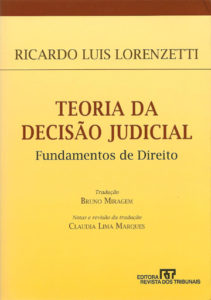 This book is the result of an extensive research that arose from the need to understand how current law really works, which is not easy, even if it seems so. Operational analysis is a methodological definition. It is important to conceive it as an instrument to solve problems. For this reason, we’ve dedicated ourselves to study how legal decisions are made, which include those decisions that arise from judges, the Legislative power, the Executive power and also from the intermediate institutions that adjudicate goods. The fact that great judges, philosophers and jurists from numerous countries have dedicated their efforts to this issue shows that it is of the utmost importance. (Fragment of the Introduction)

The emergence of the digital era raised the need to rethink important aspects related to social organization, democracy, technology, privacy and freedom, and it has been observed that many approaches do not present the theoretical sophistication that such problems require; they are sterilized, erased by rhetoric, ideology and naivety. Opinions seem seduced by novelty. The Supreme Court of the United States demonstrated its admiration for chat sites and websites, defining them as “democratic forums”. Along the same line, other authors have suggested that the Internet is a “democratic paradise”, or even a way of reaffirming the decline of political participation. (Fragment of the Introduction)

Already a long time ago, literature and philosophy anticipated their pronouncements around the naive representation of a technologically developed and democratic world and pointed out the enormous risks in terms of concentration and social control. It seems that novelty and naivety lead to ignore all that cultural baggage and that mistake leads us to ignore that the current trend in the Network is oriented to the creation of large groups that establish alliances, which end up guiding the “navigator” along roads which were are have been marked by predetermined convenience (Excerpt from the chapter “Computer science, Cyberlaw, e-commerce”, written by Ricardo L. Lorenzetti)

Ricardo Luis Lorenzetti, Argentine by birth and a universal jurist by vocation, is undoubtedly one of the most stimulating and profound Latin American civilists of today. Lorenzetti is not only the successor in the professorship of Civil and Commercial Law of the brilliant Argentine law professor Professor Jorge Mosset Iturraspe of the University of Santa Fe, but also a person who inherited from this great jurist the global and human vision, both realistic and sensitive. That vision is necessary for the challenges of the science of law and for the needs of today’s society. (Fragment of the Presentation, by Cláudia Lima Marques, year 1998)